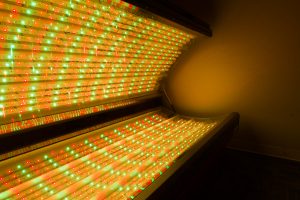 Athletes all around the world are constantly on the hunt for the right tools to increase their athletic performance.  It is obvious that the best athletes can no longer dominate their sports with simple workouts like Herschel Walker’s 1000 pushups per day. LeBron James famously spends over $1 million per year on his body, and it has allowed him to remain at the top of the NBA pyramid for the better part of two decades. Recently, research has shown that athletic performance and recovery can be improved with Photobiomodulation (PBM), a relatively cheap treatment that provides amazing results in as little as 5-15 minutes per week!

A 2016 qualitative review of over 500 studies on PBM showed that athletic performance can absolutely be enhanced with PBM. They wrote that “PBM can increase muscle mass gained after training, and decrease inflammation and oxidative stress.” In fact, the positive results were so significant that it led the authors to “raise the question of whether PBM should be permitted in athletic competition by international regulatory authorities.” For researchers to say that PBM might cause an unfair advantage for an athlete is an amazing statement, because it shows that it truly works!

When looking at the mechanisms of action, it becomes clear that PBM is a no-brainer for athletic performance and recovery. One of the main limiting factors of athletic performance is muscle fatigue. Muscle fatigue is a complex process influenced by a variety of factors, but the most important thing to remember is that aerobic metabolism is the most efficient producer of adenosine tri-phosphate (ATP), which is the main energy source for muscle fibers to fire. Under strenuous physical activity, cell metabolism gradually becomes anaerobic, as there is a buildup of Reactive Oxygen Species (ROS) which prevent oxygen absorption and consequently ATP production. This leads to an increase in lactic acid in the tissue, which we experience as the “burn” of muscle fatigue. Every athlete has experienced this at some point, and we know that the best way to increase performance is to prevent this from happening for as long as possible.

The most basic mechanism by which PBM can improve muscle performance is the effect it has on mitochondrial function. PBM has been shown to help mitochondria absorb more oxygen and produce more ATP. It does this through photochemical and photophysical changes that increase the oxygen absorption of mitochondrial membranes, and through structural changes like the formation of giant mitochondria. This allows your muscles to keep producing large amounts of ATP through aerobic metabolism, and prevents the onset of muscle fatigue. This makes your body more efficient at the most basic level of energy production, which obviously will lead to improvements in performance.

Athletes understand that one of the most important factors in performance is recovery, which is why there are so many different products and methodologies aimed at enhancing recovery. PBM is supported as a recovery treatment by a growing body of research due to its regenerative effects. PBM increases the formation of myofibrils, inhibits inflammation, and reduces the formation of ROS in damaged muscle tissue. By improving mitochondrial function, the healing process happens much more quickly and efficiently. This allows athletes to get back to training or competition sooner, so they can achieve their goals.

At ATX Hyperbarics, we have the most advanced PBM light bed available today. It is the same one used by professional sports teams like the Super Bowl Champion Buccaneers, New York Giants, and Jacksonville Jaguars, as well as the Air Force, Army, and Marine Corps. It has a variety of different wavelengths and color settings, ensuring that we can help you reach whatever goals you set, be they athletic, aesthetic, or just plain functional. Book a session online today, or give us a call!